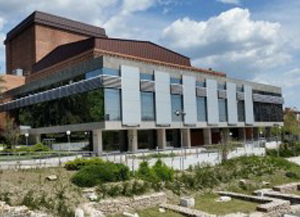 Stara Zagora (Stara Zagora) is located in Central Bulgaria. A competitive advantage for the development of business and investment in this region is its geographical position. The important European transport corridors pass through the city: No 8 and No 9

The European Transport Corridor No. 4: GERMANY – AUSTRIA – HUNGARY – ROMANIA – BULGARIA – TURKEY passes next to the Municipality. This determines the significant investment interest in the city and the municipality. Trakia Motorway provides an additional stimulus for the development of the region’s business with a fast and convenient car connection from the capital to the sea and back.

In the territory of Stara Zagora there is a non-functioning airport, which organizes the largest international specialized exhibition for agricultural machinery on the Balkan Peninsula.

The region has excellently built communications and infrastructure that allows natural gas to be used as an energy source for major production organizations.

This gives them more leverage than competitors from other regions of Bulgaria.

The administrative district of Stara Zagora has an area of ​​5 151.1 sq. Km. from a historical point of view, the region of the city offers a real walk in time. Earliest traces of civilization in the area date back to the end of the 7th millennium BC. Here are born and developed civilizations with a leading importance for Europe and its culture. Nature has donated the region with superb mineral springs, which today are the basis for building the development of SPA centers and SPA resorts. In the valley of roses, between the two mountain ranges, the richest of essential oils in the world is cultivated – oil rose, a symbol of Bulgaria.

Stara Zagora is the 6th most populous in Bulgaria – after Sofia, Plovdiv, Varna, Bourgas and Rousse and includes 11 municipalities with 206 settlements. The energy sector contributes significantly to the leading position of the city in the Bulgarian economy. Thanks to it, large-scale foreign and domestic investments are attracting. In recent years, they have focused on building new capacities of the plants and modernizing existing ones. The largest area of ​​lignite on the Balkan Peninsula is located on the territory of the region. They are used as a raw material for the extraction of electricity from 4 thermal power plants.

Other important natural resources of the region are fertile agricultural lands, forests and spas. North-West of Stara Zagora, 15 km away from the town, is located spa resort “Starozagorski Mineralni Bani”, 370 m altitude. The resort is attractive with the opportunities for the construction of hotel complexes for climatotherapy and balneotherapy. Water favors diseases of the locomotory system, the peripheral nervous system, gynecological, renal, urological, gastrointestinal and liver-bile diseases. It is slightly mineralized.

About 28,000 businesses are developing businesses in the Stara Zagora region.

The most significant sector is occupied by construction (36%), as well as electricity, heat and gas (14%). The production and distribution of electricity, heat and gaseous fuels generate a NPP of BGN 1.4 billion. The production of rubber and rubber and plastics is also a serious issue in the region. Traditions of the field are machine-building industries.

Food and beverage production and metal manufacturing and processing are sectors that are also developing seriously in recent years. On the territory of Stara Zagora there are not only Bulgarian machine building companies, but also those whose production is known and sought after in countries located on 5 continents.

According to the National Statistical Institute, foreign direct investment (FDI) in the non-financial sector in Stara Zagora region as of 31.12.2014 amounts to EUR 969.3 million, which is 21.6% more than in 2013

In 2014, the value of foreign direct investment made in industry – EUR 880.0 million, is the highest. This activity accounted for 90.8% of the total volume of FDI in Stara Zagora region and its relative share increased by 2.5% compared to the previous year.

production of vehicles;
agriculture, forestry and fisheries;
production of computer and communication equipment;
production of timber and products thereof;
mining industry;
generation and distribution of electricity, heat and gaseous fuels.

Ext. Chamber of Commerce and Industry

Why Invest in Bulgaria ?