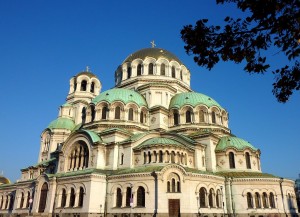 Sofia (Sofia) is the capital of Bulgaria and the largest city in the country. In the European Union ranks 15th with a population of 1 286 383 people. It is located in the central part of Western Bulgaria, in the Sofia Valley and its area is 492 km². Sofia is emerging at the crossroads of extremely important roads, these are the trans-European corridors E-80, E-79 that connect Western Europe with Asia Minor and the Middle East and the Baltic Sea with the Aegean Sea. As the main administrative, industrial, cultural, transport and university center of Bulgaria, it concentrates 1/6 of the industrial production of the country. Thanks to its strategic location on the Balkan Peninsula, Sofia and in the past is today a commercial, tourist and cultural center.

Her story dates back 7,000 years ago. During the Roman Empire, it was the center of the Roman province of Lower Dakia, and Emperor Constantine the Great called it “My Rome”. On January 4, 1878, Sofia was liberated from Ottoman rule, and because of its strategic location, it was proclaimed the capital of Bulgaria on April 4, 1879. It began to develop extremely fast and until the 1930s (under Tsar Boris III) became a modern European city. During the Second World War it was bombed by the British and American Air Force and partially destroyed. After September 9, 1944, political changes took place in Bulgaria, influencing its appearance. New buildings in urban planning began to be built. Nowadays, the capital Sofia boasts many architectural changes, making it a modern and very visited European city.

Sofia is the first in economic terms among the cities in Bulgaria. These development processes are stimulated in view of the large investor interest in the region. In recent years, the good pace of absorption of European funds has contributed to its development. The capital is the largest industrial center in the country, with the ratio of heavy industry to light weight being 55:45 (the heavy industry is heavily concentrated in two areas – North Station and Iskar Station).

Soil ore, construction materials and lignite are extracted in the Sofiafield area. The building materials are sand, gravel, limestone, limestone and clays. The region is also rich in mineral waters. Hydromineral resources on the territory of Sofia occupy a significant share of those of the country (a total of 15 fields with a mineral water consumption of 130 liters per second.) In the heavy industry, the capital generates 14% of machine building and metalworking, 9% of the chemical and rubber industry, 10% of the pulp and 11% of the textile industry in the country.

Its great importance is the center of the food, furniture and clothing industry.

It is the administrative unit with the highest relative share of non-productive and servicing employees, as a result of which the region has some of the lowest unemployment rates in the country. The region has very good development conditions in the future. An important prerequisite for this is the availability of a skilled and multilingual workforce, the large reserves of energy resources, mineral raw materials, the good development of the sectors of scientific and technological progress, the favorable transport geography and the availability of production and social infrastructure.

The real estate and investment sector saw a recovery in 2015.

Improvements in the confidence of the country’s economy are rising, which also affects the housing market, because more and more people are looking for larger properties to improve their standard of living. About 20% have increased transactions for an investment since the previous 2014. Banks also play an important role in the development of the sector by offering more favorable lending conditions. Buyers’ demand provokes a replies from entrepreneurs, in this respect building permits are issued 5 times higher than the most active period for the country (2012).

Interesting fact is the attractiveness of Bulgaria as an outsourcing destination.

It ranks third in the world, enjoying a strong reputation. The software industry has already formed 1.74% of the country’s GDP, and for the past 10 years IT companies’ revenue has grown by 600%. The information and communication technologies and outsourcing and business services sectors are among the main drivers for the creation of new jobs. Only in the last 12 months their number is 41,000 in these spheres.

Why Invest in Bulgaria ?