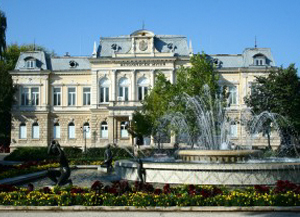 Ruse is the largest port city along the Danube River. It is located in Northeastern Bulgaria and is the administrative center of Ruse district. It is located 310 km from the capital Sofia and 75 km from the Romanian capital Bucharest.

It is a strategic and logistical center of our country.

It is the fifth largest in Bulgaria, preceded by Burgas and second in Northern Bulgaria after the sea capital Varna.

The town boasts a 23-year-old history that began during the Thracians with the construction of a Thracian settlement, the successor of which during Roman times became the fortress Sexaginta Prista (“Port of 60 ships”). For several decades the city has become Europe’s front door to Bulgaria. With the enlargement of the European Union, it is a symbol of European unification. It is the seat of Bulgarian Danube shipping. Rousse is called “Little Vienna” because of the beautiful architecture in the central part of the city, in the baroque and rococo style of the late nineteenth century and early twentieth century.

Rousse and its geographical position place it in the center of an important republican crossroad. Here are two of the main Euro corridors – №7 and №9. The city boasts all types of transport – road, water, rail, air. It is relatively distant from the big cities in Bulgaria, 324 km from Sofia, 300 km from Plovdiv and 294 km from Burgas. On the other hand, as a border town, Rousse is a much smaller distance from the Romanian capital Bucharest – proximity, which carries potential and opportunities for future development – economic connections, shared transport infrastructure, goods and services market , combined tourism programs.

The city attracts foreign investment, which only for 2015. increased by 7.3%.

The largest amount – 270 million euros – is the investment in industrial enterprises in the region. In the services sector – transport, trade, hotels and restaurants, investments are just over 40 million euros. In terms of the amount of investments made, Rousse region occupies eighth place in the country.

There are some of the largest companies in the chemical and refining industry – producers of water soluble paints and plasters for interior and exterior plastering, raw materials and inorganic paints for varnishes and paints, motor oils and batteries, rubber production. The main types of production in the mechanical engineering, mechanical engineering and metal processing industries are agricultural machinery, vessels, car parts, and the largest automotive companies in the world Audi, BMW, Ford, Renault and others.

In the modern economy of the city, the sectors that predominate are from the sewing, textile and food sectors.

Tailoring industry is a sector that dominates the economic profile of the municipality and provides permanent employment. The number of these companies in Rousse is more than 250. According to Rousse Municipality’s own information, more than 50 tailor-made enterprises work and produce products for the markets of Germany, France, Italy and the Middle East. Rousse has long-standing traditions in the production of socks and textiles.

The food industry is also well developed. Among the larger enterprises are some of the biggest wineries in the country.

The extraction industry is also covered by processing inert materials from the Danube River.

A logistics center (Free Zone – Rousse) was built and it is the biggest and the most developed in the Republic of Bulgaria and has a serious advantage for attracting foreign investors in the region. Port complex – Rousse, also one of the enterprises that define the economic aspect of the municipality – manages the activity of several major Bulgarian ports located on the Danube.

An important part of the economic profile of the Municipality of Rousse is the presence of Industrial Park, which covers a total area of ​​638 decares – about 90 decares of them are engaged with servicing the urban and technical infrastructure.

In Rousse there are large companies that provide a certain level of employment in the municipality. Today, Rousse University, traditionally aimed at technical specialties, a strong mathematical gymnasium and a host of small and medium-sized IT companies, is one of those places where the IT sector moves. The city also offers high-speed access channels, multiple vendors with a developed optical network that fully covers it.