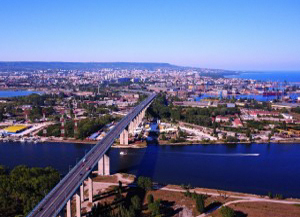 Varna (Varna) is situated in the bend of Varna Bay and is the largest town on the Bulgarian Black Sea coast. The city is often called the “Sea Capital of Bulgaria”.

Its outlet to the Black Sea and the harbor, along with the construction of large chemical plants and refineries, make the city an industrial center.

Today it focuses not only on a small part of the country’s national industry, but above all, it remains a first-class sea resort, visited by numerous foreign and Bulgarian holidaymakers. It is situated in the bay of Varna Bay.

According to early written records, the city was founded in the second quarter of the 6th century AD. from emigrants from the Malaysian town of Mali. In the first half of the 11th century, a town with a fortress emerged, later acquiring the Old Bulgarian name Varna. In the XVIII century the Bulgarian Revival began and in the 19th century in Varna a rich cultural life arose in the Bulgarian community center – begin to play pieces, hold various folk and religious celebrations. After the liberation of Bulgaria in 1878, Varna became one of the cultural centers of Bulgaria.

The economy of the Varna region is well represented at national level, with gross domestic product accounting for 5.4% of the national economy, while the economic activity is above the average for the country (46.68%). The region is one of the top speeds in adapting to the new conditions after Sofia – Bourgas and Plovdiv region. More than 50% is the share of the private sector in the economy, the most significant being the percentage of the manufacturing industry.

Varna region is ranked third in the country by indicator “foreign investments invested per district per capita”.

The climatic conditions of the region, the existence of a beach (over 17 km), protected areas, coastal forests, the presence of sea water with very good recreational characteristics (European norms), yacht marinas and infrastructure, determine the development of international tourism five resorts with over 40,000 beds in them. Existing thermal resources, healing mud, modern facilities and a medical network offer opportunities for offering a year-round tourist product.

The region has been successfully developing – balneological, cultural, congress, ecological and rural tourism.

Favorable soil and climatic conditions are the cause of developed agriculture. Grain and fodder crops, perennial crops and vineyards are cultivated in the area on 220,045 ha. Very strong investor interest in Varna has made an impression in recent years. Foreign investors are exploring the city and the region’s assets in order to build a second Asparuhov bridge and develop the port of the city. This could lead to a stir in the economy of the city and in particular in the Industrial Zone of Varna. Currently, due to lack of modern facilities, very large ships are redirected to the port of Constanta. The desire is the shipping symbol of the city, to be developed at all possible on a high European and international level.