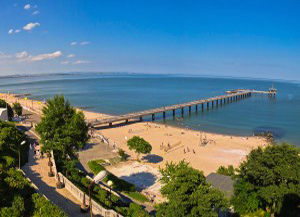 Burgas (Burgas) is the second largest city on the Bulgarian Black Sea coast after Varna, and the fourth largest in the country. It is situated in the eastern part of the Bourgas valley, surrounded by the lakes of Burgas, Atanasovsko and Mandrensko in the west and the Black Sea in the east.

The city of Burgas is the most important economic, transport, administrative and cultural center in Southeastern Bulgaria.

It is the administrative center of the municipality of the same name with the presence of regional and national institutions. Its history dates back to the time of the Emperor Antonius Pius (138-161), when the fortress Burgos was built, which later gave the name of the modern city of Bourgas. In the 17th century, the Ottoman fleet was built on this port, which served as its military base. Nowadays Bourgas stands out with its cultural events – festivals, musical events, folklore competitions, theater performances, poetry evenings, opera performances. During the summer months, one of the most visited and famous festivals – Spirit of Burgas – is held.

Today’s city of Burgas is one of the major economic and industrial centers of Bulgaria. Together with Sofia, it is part of the European Union’s future supporting transport network or (TEN-T), which includes the construction of road infrastructure, railway lines and the development of Port of Bourgas.

The main engine for the economic conditioning of the city is its access to the Black Sea.

It determines the development of industries such as: shipbuilding, tourism, fishing, international trade and salt production. The bay of the city of Burgas, the harbor, as well as the convenient geographical position predetermine the development of the petrochemical industry. Some of the industries in this region are unique and defining for the country: dark and light petroleum products, chemical fibers, plastics and other chemical products are produced. Private sector companies focus on several industries: industry, construction, transport, commerce. Good access to raw materials, the nearby refinery, the international airport are all factors that attract and retain the attention of those wishing to develop business in the area.

More than 40% of the mass tourism in the country takes place on the territory of the region.

Tourism and international trade in the region are among the leading ones, and the city offers a variety of opportunities for professional development and pay, competing with those in Sofia, Plovdiv and Varna. The region is visited by the majority of foreign and Bulgarian tourists and borders with Turkey, which is a significant factor in international tourism.

Bourgas region is the center of the Bulgarian fishing and fish processing industry, 80% of which are carried out by Burgas companies.

For this purpose, one of the largest cold stores in Bulgaria was built in the area of ​​the Burgas port. In the last 2 years the Industrial Logistics Park of Bourgas, which is located in the Northern Industrial Zone, is being built. It connects directly to the harbor via the railway line, the Western Road junction and the Trakia motorway. The park has land of 2 to 30 decares and the total area of ​​the industrial zone is 238 decares. Areas are available to foreign companies who would like to start building their production bases in the area. The planned investments for this project exceed 10 million euros. With this step the city of Burgas is presented as a serious logistics center in the international context.